In April 1996, the Navan Lions Club sponsored a public meeting which indicated a need and desire to form a Community Association. With the guidance of Diane Huffman from the South Nation Conservation Office, by March 1997 progress was under way to create a constitution. The Navan Community Association was formed to create a voice for the residents, with a greater impact and a vision of making Navan a wonderful place to live. Several Lions played a key role in the creation and sustaining of the organization. On November 12, 2001 the Association became incorporated.

The purpose of the forming of the Association was to:
– Empower the community to have a voice with governments
– Utilize community resources and businesses
– Build capacity
– Raise awareness and educate all ages
– Build a sense of pride

Nowadays the NCA provides the community link to our City representative and is the umbrella organization to many committees. Members maintain the floral gardens at the entrance of the village and maintain the appearance of the Cenotaph. The NCA has successfully completed projects such as the Cenotaph Restoration, the Shade Structure Park Project, the Clock Tower and Wall of Fame, the Navan 150th Celebration, and the Outdoor Skating Rink, to name a few.

We would like to encourage all residents of Navan to become members of the community association. Your membership entitles you to vote at the annual general meetings, bring issues relevant to the village onto the agenda and get actively involved in projects that are of interest to you.

Please support the NCA by becoming a member! 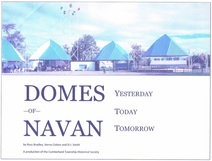 The Cumberland Township Historical Society has produced a booklet telling the story of how the “Domes of Navan” found their way from LeBreton Flats to the Navan Fairgrounds back in 1984. Anyone who likes the Navan Fair (and let’s face it that’s just about everyone) will find this to be a nice read on a bit of local history from the mid 1980s, and a great gift idea for friends and relatives.